Thank you for your patience while we retrieve your images.

11 photos
at 6600 Germany rd., Durhamville, NY The Town of Verona is currently having an authentic Erie Canal mural painted on the Rte 46 side of a town building located at 6600 Germany Road, Durhamville The work by artist and art teacher, Jane Grace Taylor, who was chosen for her extensive portfolio and many awards. She painted the Patriot's Wall in Rome,. She also painted the murals on the Sports Hall of Fame at the Erie Canal Village, as well as the Martin Luther King Jr. mural in Utica, among many others.

The mural will depict 3 authentic photographs that represent the north, central, and south parts of the Town of Verona, all of which thrived as the Old Erie became the transportation link for goods and resources through central New York. This section of the canal was later abandoned with the construction of the Barge Canal which ran from Rome in a more direct path across to Oneida Lake.

This mural will be viewed by thousands of people over many years and serve as a proud reminder of Verona's integral part in the early industry that helped grow New York State.

The project began as an idea for the promotion of the history of the town of Verona and was a joint effort between the Town and the Verona Historical Association. The town of Verona prepared the cinderblock building with a resurfacing of the open window spaces and then applied several coats of paint to the wall, preparing a canvas for the artist. Because the building is long rather than tall, it was decided to depict three photos side by side. The Verona Historical Association voted on the photos, from the files of the Town Historian, choosing three that were authentic and which represent New London, Stark's Landing at Higginsville and the Pfeifer Block business section of Durhamville. All of these towns thrived along the canal. According to the 1855 New York State census, New London was home to 4 hotels, 5 retail stores, and 16 groceries. Durhamville had 5 hotels, 7 retail stores and 17 groceries. Higginsville was at that time included by a north/south division in the statistics for those two districts. Photo attachments 1. Old Erie Canal at New London 2. Erie Canal at Stark's Landing 3. Pfeifer Block on Erie Canal at Durhamville 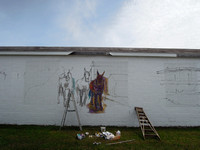 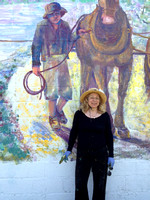 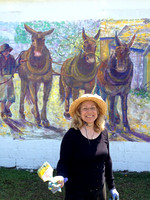 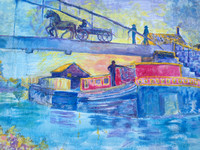 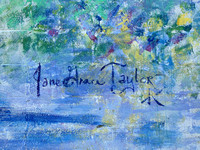 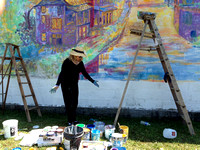